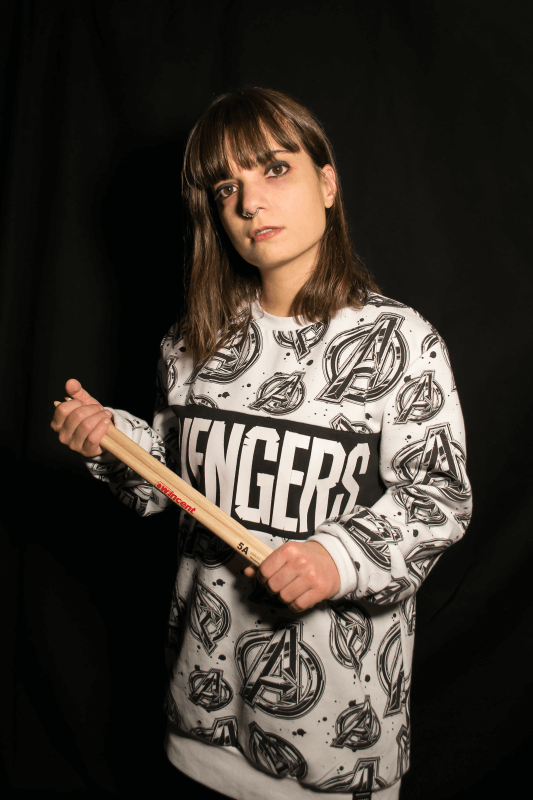 Eleni Nota was born in 1994 in Rhodes, Greece. She started taking piano lessons at the age of 7 and drum lessons at the age of 12. Her passion for music made her move to Athens in 2012, where she joined the Professional Program of LAB Music Education and, after 2 years, she received her degree on Music Performance (Drums).

Eleni was a member of several metal and rock bands in Greece such as Mask of Prospero, Ghost Season, My Inferno, Lightfold and more. She gained a lot of experience as a session drummer with bands like Before Sunday, Bring Back Persephone, Meet The Maker, Warriorz Dance, Psycorepaths and many more.

Her solid drumming led her to tour in England, Poland, Germany, Slovakia, Cyprus and the Czech Republic and to share the stage with huge bands like The Agonist, Wolfheart, Thy Art Is Murder, Tesseract, The Devil Wears Prada, Defeater and Diary of Dreams.

Eleni has been giving private drum lessons since 2017 and runs a great YouTube channel where she posts drum covers of metal and rock songs.

From 2018 to 2019 she worked on television as the drummer of the house band of one of the most popular night-time TV shows, “The 2night Show” (ANT1 Channel).

In May 2020 she joined the Brazilian thrash metal band “Nervosa” and she recorded with them their upcoming album, “Perpetual Chaos”, that will be released through “Napalm Records” on January 2021. The first single, called “Guided By Evil”, was released on October 2020 and became instantly a fan favorite.

Eleni uses the W-5A sticks.
Check them out here!