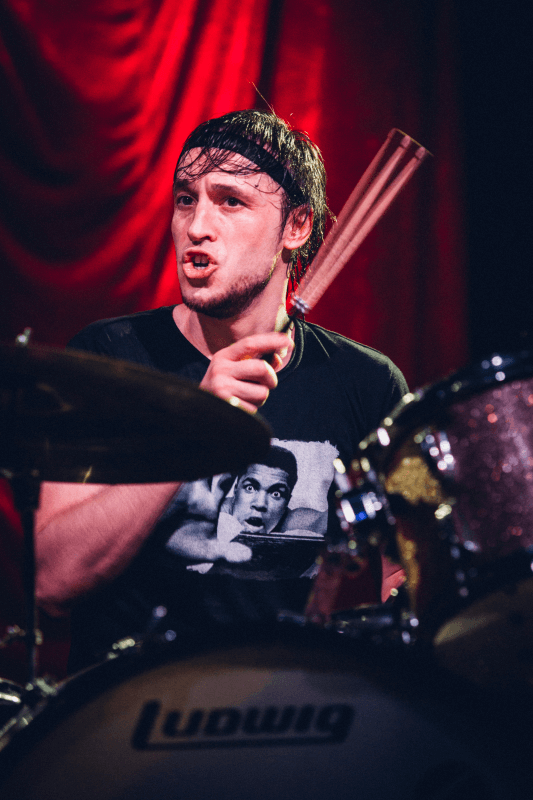 Catriel Ciavarella was born on a warm night of September in 1979 in Haedo, Buenos Aires, Argentina. Our west, some miles outside the city, in what´s considered one of the most prolific cradles in rock: a lot of the most relevant artist in our culture, and some legends aswell. At the age of 11 he witnessed one of his first live show acts, and payed special attention to that unique drummer. Only 3 years after that, and when he was only 14 years old, he was first called in as a possible incorporation to that very same band. Time would make it`s way, and on June the 5th 2004 he was debuting as the band, yes, that band´s new drummer: DIVIDIDOS.

DIVIDIDOS is THE power trio, in time, in it´s constant search, in it´s sound. In the way the could always teletransportate an audience to the best of 70´s rock aswell as argentinian folklore, in a way nobody has ever done. And when Catriel joined the band, he was joining not less than Ricardo Mollo, a national guitar hero and one of the most important musicians of our time, aswell as Diego Arnedo, a bass guitar player beyond every definition, whose style many have followed.

He is a well renowned musician and artist, and considered amongst the best of his generation; dominating rock and other genders, with a distinctive sound aswell as a style that makes no place for comparison. And as they say, you do not know Catriel Ciavarella for real, until you´ve seen him playing live. Something happens when he´s on stage, an organic feel, an inevitable connection and a strength that´s rarely seen.

His passion and dedication towards his sound, set and constant search are perfectly combined with some of the things that have distinguished him aswell in Argentina: his love for Muhammad Ali and sports, his multiple hobbies, such as model-making, and vintage cars.

After playing with MAM (an iconic rock band) for over 9 years, and having recorded OPCIÓN in 1999, a cult record, with only 20 years old, he made time to play with several local artists… He played along Alejandro “El Bocha” Sokol´s band, another argentinian icon, aswell as alternative power bands like NUCA, and artists like Erica García.

Currently working on new music with Divididos, aswell as his own music.

Catriel uses the W-5B sticks.
Check them out here!
Website